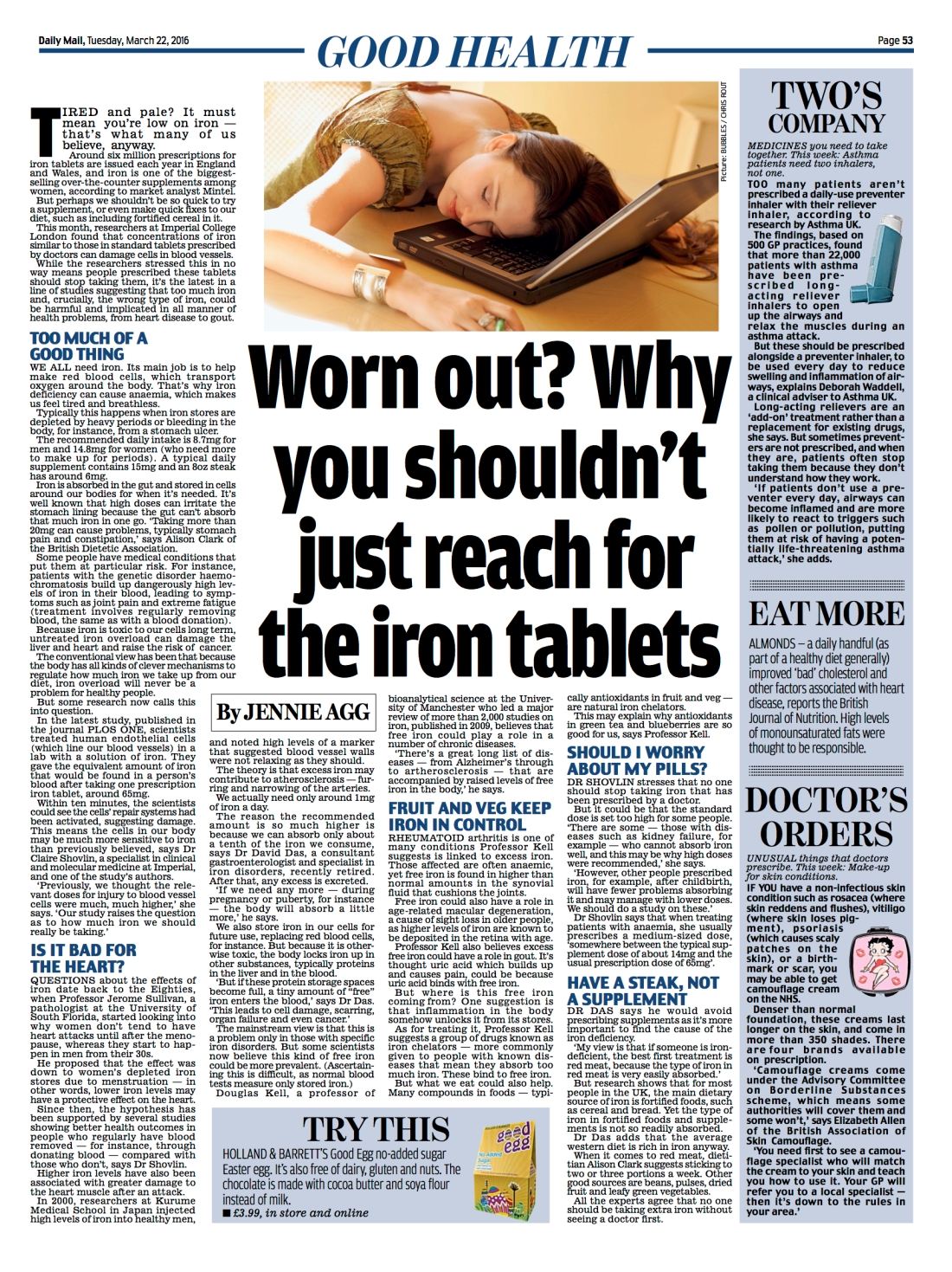 Tired and pale? It must mean you’re low on iron — that’s what many of us believe, anyway.

Around six million prescriptions for iron tablets are issued each year in England and Wales, and iron is one of the biggest-selling over-the-counter supplements among women, according to market analyst Mintel.

Little wonder, given that the supplement-makers push the message that iron can help if your energy is waning. But perhaps we shouldn’t be so quick to try a supplement, or even make quick fixes to our diet, such as including fortified cereal in it.

This month, researchers at Imperial College London found that concentrations of iron similar to those in standard tablets prescribed by doctors can damage cells in blood vessels.

While the researchers stressed this in no way means people who have been prescribed these tablets should stop taking them, it’s the latest in a line of studies suggesting that too much iron and, crucially, the wrong type of iron, could be harmful and implicated in all manner of health problems, from heart disease to gout.

TOO MUCH OF A GOOD THING

We all need iron. Its main job is to help make red blood cells, which transport oxygen around the body. That’s why iron deficiency can cause anaemia (where there aren’t enough red blood cells), which makes us feel tired and breathless.

Typically this happens when iron stores are depleted by heavy periods or bleeding in the body, for instance, from a stomach ulcer.

The recommended daily intake is 8.7mg for men and 14.8mg for women (who need more to make up for periods). A typical daily iron supplement contains 15mg and an 8oz steak has around 6mg.

Iron is absorbed in the gut and stored in cells around our bodies for when it’s needed. It’s well known that high doses can irritate the stomach lining because the gut can’t absorb that much iron in one go.

‘Taking more than 20mg can cause problems, typically stomach pain and constipation,’ says Alison Clark, of the British Dietetic Association.

Some people have medical conditions that put them at particular risk. For instance, patients with the genetic disorder haemochromatosis build up dangerously high levels of iron in their blood, leading to symptoms such as joint pain and extreme fatigue (treatment involves regularly removing blood, the same as with a blood donation).

Because iron is toxic to our cells long term, untreated iron overload can damage the liver and heart and raise the risk of cancer.

The conventional view has been that because the body has all kinds of clever mechanisms to regulate how much iron we take up from our diet, iron overload will never be a problem for healthy people.

But some research now calls this into question.

In the latest study, published in the journal PLOS ONE, scientists treated human endothelial cells (which line our blood vessels) in a lab with a solution of iron. They gave the equivalent amount of iron that would be found in a person’s blood after taking one prescription iron tablet, around 65mg.

Within ten minutes, the scientists could see the cells’ repair systems had been activated, suggesting damage. This means the cells in our body may be much more sensitive to iron than previously believed, says Dr Claire Shovlin, a specialist in clinical and molecular medicine at Imperial, and one of the study authors.

‘Previously, we thought the relevant doses for injury to blood vessel cells were much, much higher,’ she says. ‘Our study raises the question as to how much iron we should really be taking.’

IS IT BAD FOR THE HEART?

Questions about the effects of iron date back to the Eighties, when Professor Jerome Sullivan, a pathologist at the University of South Florida, started looking into why women don’t tend to have heart attacks until after the menopause, whereas they start to happen in men from their 30s.

He proposed that the effect was down to women’s depleted iron stores due to menstruation — in other words, lower iron levels may have a protective effect on the heart.

Since then, the hypothesis has been supported by several studies showing better health outcomes in people who regularly have blood removed — for instance, through donating blood — compared with those who don’t, says Dr Shovlin.

Higher iron levels have also been associated with greater damage to the heart muscle after a heart attack.

In 2000, researchers at Kurume Medical School in Japan injected high levels of iron into healthy men, and noted high levels of a marker that suggested blood vessel walls were not relaxing as they should. The theory is that excess iron may contribute to atherosclerosis — furring and narrowing of the arteries.

We actually need only around 1mg of iron a day. The reason the recommended daily intake is set so much higher is because we can absorb only about a tenth of the iron we consume, explains Dr David Das, a consultant gastroenterologist and specialist in iron disorders, recently retired from Stepping Hill Hospital in Stockport. After that, any excess is excreted. ‘If we need any more — during pregnancy or puberty, for instance — the body will absorb a little more,’ he says.

We also store some iron in our cells for future use, replacing red blood cells, for instance. But because it is otherwise very toxic, the body locks iron up in other substances, typically proteins in the liver and in the blood.

‘But if these protein storage spaces become full, a tiny amount of “free” iron enters the blood,’ says Dr Das. ‘This leads to cell damage, scarring, organ failure and even cancer.’

The mainstream view is that this is a problem only in people with specific iron disorders. But some scientists now believe this kind of free iron could be more prevalent. (Ascertaining this, however, is difficult, as normal blood tests measure only stored iron levels, not free iron.)

Douglas Kell, a professor of bioanalytical science at the University of Manchester who led a major review of more than 2,000 studies on iron, published in 2009, believes that free iron could play a role in a number of chronic diseases.

‘There’s a great long list of diseases — from Alzheimer’s through to artherosclerosis — that are accompanied by raised levels of free iron in the body,’ he says.

Rheumatoid arthritis, where the immune system attacks the joints, is one of many conditions Professor Kell suggests is linked to excess iron.

Sufferers are often anaemic, yet free iron is found in higher than normal amounts in the synovial fluid that cushions the joints.

Free iron could also have a role in age-related macular degeneration, a cause of sight loss in older people, as higher levels of iron are known to be deposited in the retina with age.

Professor Kell also believes excess free iron could have a role in gout. It’s thought uric acid, a waste product which builds up and causes gout pain, could be a response to iron overload — uric acid binds with free iron.

But where is this free iron coming from? One suggestion is that inflammation in the body somehow unlocks it from its stores.

As for treating it, Professor Kell suggests a group of drugs known as iron chelators — more commonly given to people with known diseases that mean they absorb too much iron — could treat a much wider range of conditions. These bind to free iron and stop it misbehaving.

But what we eat could also help. Many compounds in foods — typically antioxidants in fruit and veg — are natural iron chelators.

This may explain why antioxidants in green tea and blueberries, for instance, are so good for us, says Professor Kell. ‘A lot of the compounds known to be good for you are things that can bind free iron.’

SHOULD I WORRY ABOUT MY PILLS?

Dr Shovlin stresses that no one should stop taking iron that has been prescribed by a doctor.

‘Very many people do need extra iron,’ she says. It could be, however, that the standard dose is set too high for some people.

‘There are some — those with diseases such as kidney failure, for example — who cannot absorb iron well, and this may be why high doses were recommended.

‘However other people prescribed iron — for example, after having a baby or because of heavy periods — will have fewer problems absorbing it and may manage with lower doses. We should do a study on these otherwise healthy people, to find out what dose they really need.’

Dr Shovlin says that when treating patients with anaemia, she usually prescribes a medium-sized dose — ‘somewhere between the typical supplement dose of about 14mg and the usual prescription dose of 65mg’.

HAVE A STEAK, NOT A SUPPLEMENT

Dr Das says he would avoid prescribing iron supplements as it’s more important to work out the cause of the iron deficiency.

‘My personal view is that if someone is iron-deficient, the best treatment is red meat — I would always try that first. Because the type of iron in red meat, haem iron, is very easily absorbed by the gut.’

However, research shows that for most people in the UK, their main dietary source of iron is fortified foods, such as cereal and bread.

Yet the type of iron used in fortified foods and supplements is not so readily absorbed by the gut.

Dr Das adds that fortified food is not really necessary anyway as the average western diet is rich in iron, even for vegetarians.

While she agrees that red meat is an excellent source of iron, Alison Clark suggests you stick to two or three portions a week — no more than 500g in total — because too much is associated with increased cancer risk. Other good sources of iron are beans, pulses, dried fruit and leafy green vegetables.

All the experts agree that no one should be taking extra iron without seeing a doctor first.