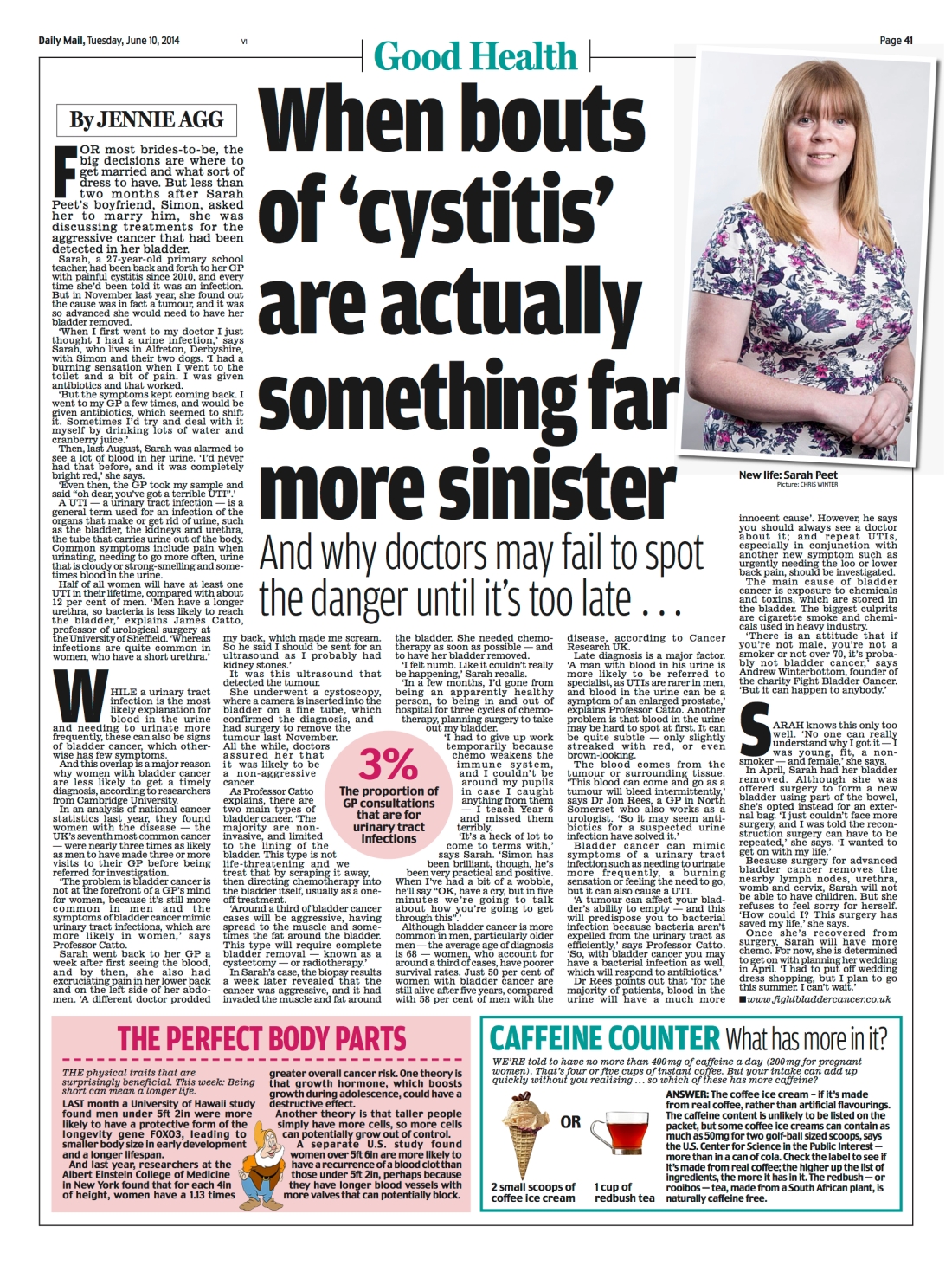 For most brides-to-be, the big decisions are where to get married and what sort of dress to have. But less than two months after Sarah Peet’s boyfriend, Simon, asked her to marry him, she was discussing treatments for the aggressive cancer that had been detected in her bladder.

Sarah, a 27-year-old primary school teacher, had been back and forth to her GP with painful cystitis since 2010, and every time she’d been told it was an infection. But in November last year, she found out the cause was in fact a tumour, and it was so advanced she would need to have her bladder removed.

‘When I first went to my doctor I just thought I had a urine infection,’ says Sarah, who lives in Alfreton, Derbyshire, with Simon and their two dogs. ‘I had a burning sensation when I went to the toilet and a bit of pain. I was given antibiotics and that worked.

‘But the symptoms kept coming back. I went to my GP a few times, and would be given antibiotics, which seemed to shift it. Sometimes I’d try and deal with it myself by drinking lots of water and cranberry juice.’

Then, last August, Sarah was alarmed to see a lot of blood in her urine. ‘I’d never had that before, and it was completely bright red,’ she says.

‘Even then, the GP took my sample and said “oh dear, you’ve got a terrible UTI”.’

A UTI – a urinary tract infection – is a general term used for an infection of the organs that make or get rid of urine, such as the bladder, the kidneys and urethra, the tube that carries urine out of the body. Common symptoms include pain when urinating, needing to go more often, urine that is cloudy or strong-smelling and sometimes blood in the urine.

Half of all women will have at least one UTI in their lifetime, compared with about 12 per cent of men. ‘Men have a longer urethra, so bacteria is less likely to reach the bladder,’ explains James Catto, professor of urological surgery at the University of Sheffield. ‘Whereas infections are quite common in women, who have a short urethra.’

While a urinary tract infection is the most likely explanation for blood in the urine and needing to urinate more frequently, these can also be signs of bladder cancer, which otherwise has few symptoms.

And this overlap is a major reason why women with bladder cancer are less likely to get a timely diagnosis, according to researchers from Cambridge University.

In an analysis of national cancer statistics last year, they found women with the disease – the UK’s seventh most common cancer – were nearly three times as likely as men to have made three or more visits to their GP before being referred for investigation.

‘The problem is bladder cancer is not at the forefront of a GP’s mind for women, because it’s still more common in men and the symptoms of bladder cancer mimic urinary tract infections, which are more likely in women,’ says Professor Catto.

Sarah went back to her GP a week after first seeing the blood, and by then, she also had excruciating pain in her lower back and on the left side of her abdomen. ‘A different doctor prodded my back, which made me scream. So he said I should be sent for an ultrasound as I probably had kidney stones.’

It was this ultrasound that detected the tumour.

She underwent a cystoscopy, where a camera is inserted into the bladder on a fine tube, which confirmed the diagnosis, and had surgery to remove the tumour last November. All the while, doctors assured her that it was likely to be a non-aggressive cancer.

As Professor Catto explains, there are two main types of bladder cancer. ‘The majority are non-invasive, and limited to the lining of the bladder. This type is not life-threatening and we treat that by scraping it away, then directing chemotherapy into the bladder itself, usually as a one-off treatment.

‘Around a third of bladder cancer cases will be aggressive, having spread to the muscle and sometimes the fat around the bladder. This type will require complete bladder removal – known as a cystectomy – or radiotherapy.’

In Sarah’s case, the biopsy results a week later revealed that the cancer was aggressive, and it had invaded the muscle and fat around the bladder. She needed chemotherapy as soon as possible – and to have her bladder removed.

‘I felt numb. Like it couldn’t really be happening,’ Sarah recalls.

‘In a few months, I’d gone from being an apparently healthy person, to being in and out of hospital for three cycles of chemotherapy, planning surgery to take out my bladder.

‘I had to give up work temporarily because chemo weakens the immune system, and I couldn’t be around my pupils in case I caught anything from them – I teach Year 6 and missed them terribly.

‘It’s a heck of lot to come to terms with,’ says Sarah. ‘Simon has been brilliant, though, he’s been very practical and positive. When I’ve had a bit of a wobble, he’ll say “OK, have a cry, but in five minutes we’re going to talk about how you’re going to get through this”.’

Although bladder cancer is more common in men, particularly older men – the average age of diagnosis is 68 – women, who account for around a third of cases, have poorer survival rates. Just 50 per cent of women with bladder cancer are still alive after five years, compared with 58 per cent of men with the disease, according to Cancer Research UK.

Late diagnosis is a major factor. ‘A man with blood in his urine is more likely to be referred to specialist, as UTIs are rarer in men, and blood in the urine can be a symptom of an enlarged prostate,’ explains Professor Catto. Another problem is that blood in the urine may be hard to spot at first. It can be quite subtle – only slightly streaked with red, or even brown-looking.

The blood comes from the tumour or surrounding tissue. ‘This blood can come and go as a tumour will bleed intermittently,’ says Dr Jon Rees, a GP in North Somerset who also works as a urologist. ‘So it may seem antibiotics for a suspected urine infection have solved it.’

Bladder cancer can mimic symptoms of a urinary tract infection such as needing to urinate more frequently, a burning sensation or feeling the need to go, but it can also cause a UTI.

‘A tumour can affect your bladder’s ability to empty – and this will predispose you to bacterial infection because bacteria aren’t expelled from the urinary tract as efficiently,’ says Professor Catto. ‘So, with bladder cancer you may have a bacterial infection as well, which will respond to antibiotics.’

Dr Rees points out that ‘for the majority of patients, blood in the urine will have a much more innocent cause’. However, he says you should always see a doctor about it; and repeat UTIs, especially in conjunction with another new symptom such as urgently needing the loo or lower back pain, should be investigated.

The main cause of bladder cancer is exposure to chemicals and toxins, which are stored in the bladder. The biggest culprits are cigarette smoke and chemicals used in heavy industry.

‘There is an attitude that if you’re not male, you’re not a smoker or not over 70, it’s probably not bladder cancer,’ says Andrew Winterbottom, founder of the charity Fight Bladder Cancer. ‘But it can happen to anybody.’

Sarah knows this only too well. ‘No one can really understand why I got it – I was young, fit, a non-smoker – and female,’ she says.

In April, Sarah had her bladder removed. Although she was offered surgery to form a new bladder using part of the bowel, she’s opted instead for an external bag. ‘I just couldn’t face more surgery, and I was told the reconstruction surgery can have to be repeated,’ she says. ‘I wanted to get on with my life.’

Because surgery for advanced bladder cancer removes the nearby lymph nodes, urethra, womb and cervix, Sarah will not be able to have children. But she refuses to feel sorry for herself. ‘How could I? This surgery has saved my life,’ she says.

Once she’s recovered from surgery, Sarah will have more chemo. For now, she is determined to get on with planning her wedding in April. ‘I had to put off wedding dress shopping, but I plan to go this summer. I can’t wait.’

Originally published by the Daily Mail, Good Health in 2014. Sarah sadly died several months after this article was published.